H160 is a technological helicopter from Airbus Helicopters, which gathered the best from H145 and H175 models.

The company’s goal in creating this model was to combine comfort, safety and competitiveness in the business aviation market and in the helicopter industry as a whole in one helicopter. The model has become quieter and more environmentally friendly compared to other helicopters in the “H” line. Multifunctional helicopter is designed for application in gas and oil industry, for charter, corporate, commercial, vip flights, rescue operations, medical charter helicopter flights and transportation of state persons.

The helicopter combines technology, speed, comfort, multi-tasking and style. Construction of composite materials allowed implementing design solutions in the form of a flat cockpit and large portholes, improving aerodynamic performance and significantly reducing takeoff weight of the machine. That in its turn allowed to decrease the fuel consumption and operational expenses by 20%.

The helicopter can carry from 4 to 12 passengers depending on the configuration and layout of the cabin.

The H160 series is available in three types of design: Line, Exclusive and Editions. Line – the design in the style of a sports car is presented in several variants. Exclusive – VIP-series with the most individual approach and high quality performance of the interior trimming, in general and in details to satisfy the most demanding client at the highest level. Editions combines the brands and designers of Hermes, Mercedes Benz and the renowned Peter Eidsgard of Pegasus Design. 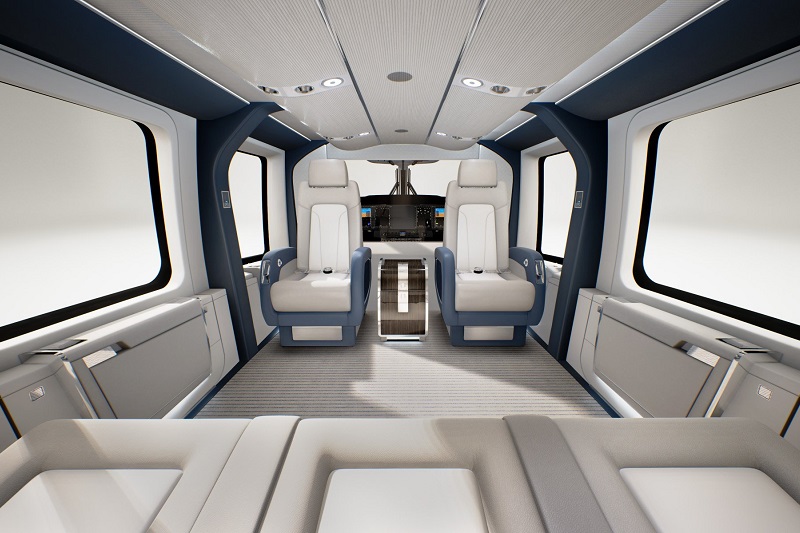 The helicopter is the epitome of innovation. A visual and technological feature of the H160 is the propeller blades with Blue Edge technology. The geometry of the blades with a curve resembles a hockey stick, like a hockey player. When the helicopter flies, a swirling flow is created at the ends of the main rotor blades, the geometry of the blade tips reduces the swirling flow, which reduces the noise level by 5 dB. Changing the curvature of the blades made it possible to increase the helicopter’s payload by 100 kg.

Developers of Airbus H160 have applied horizontal stabilizer of biplane scheme and fenestron inclined tail rotor, which together reduce noise influence and add smoothness during the flight, as well as significantly improve controllability and flight characteristics of the helicopter. Such helicopter flight is as comfortable and balanced as possible.

Developing the H160 model, Airbus engineers decided not to use the helicopter’s electric remote flight control system and the rotor blade icing protection system as part of the basic package.

The chassis and brakes of the helicopter were changed, instead of the usual hydraulic systems they used a system with an electric drive, thereby reducing weight and increasing the reliability of the aircraft operation. Also the additional reserve system of fuel and lubricants supply was modified and installed, what significantly influences safety of flights and helicopter operation in ordinary and extreme conditions.

Airbus designers used Helionix avionics system to reduce pilot load during flight, which in its turn increases duration and quality of piloting. Flight information is displayed on four multi-media touch-screen monitors. The multifunctional Helionix system works in combination with a four-axis autopilot. Indicator of flight mode restrictions informs the pilot about the parameters of operation of engines and helicopter systems in due time. Avionics system has considerable potential and functionality in comparison with equipment of a number of helicopters. It is able to process and monitor weather conditions along the flight route, as well as integrated system of recognition and avoidance of ground obstacles together with synthetic vision system, which is significantly effective during landing in bad weather conditions and on snowy places for landing. 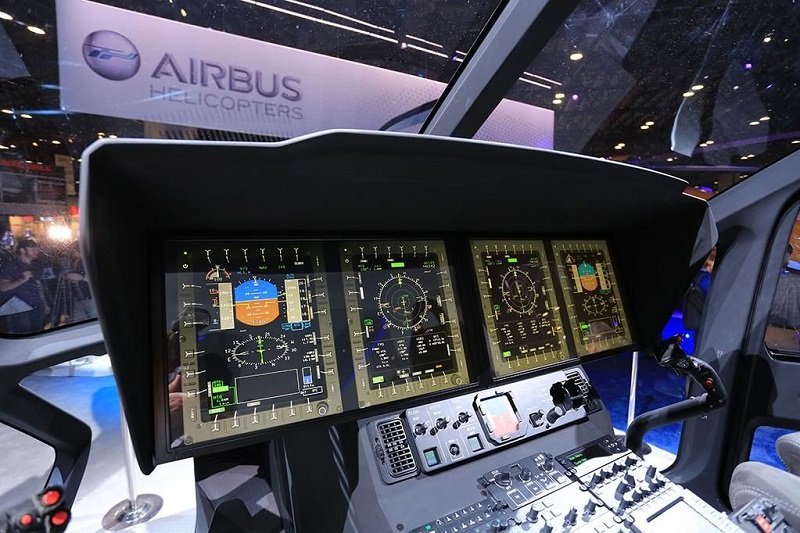 The helicopter received new Arrano engines with up to 1,300 hp. This version allows saving 10 to 15 percent on fuel costs during all phases of piloting, including when reaching cruising mode.

Specialists, engineers, developers and designers of Airbus Helicopters have invested a lot of energy, thought and desire to make the H160 one of the most advanced aircraft in the world’s aviation.