Bell 505 Jet Ranger X – the new generation of helicopters in the world aviation and in the model range of Bell Helicopters. Jet Ranger X is a high-tech helicopter, which gathered the best indicators of price, quality, comfort and reliability.

During the development of the helicopter designers used advanced technologies and solutions, based on extensive experience in the production and operation of helicopters company for several decades.

Bell 505 is different primarily aerodynamic glass cockpit with a wide viewing angle in the vertical and horizontal planes. This modification of the cabin greatly improves the pilot’s view, which allows to use this helicopter in different difficult conditions for piloting and makes the machine as effective as possible to perform high complexity tasks. Externally, this Bell helicopter resembles Eurocopter 120 and is a direct competitor.

The helicopter has received increased interior space. Engineers tried to arrange the internal equipment, pilot and passenger seats as effectively as possible.

The ceiling is now higher. The upper instrument panel left only the essentials, the rotor brake, headset mounts and the helicopter’s lights switch. All other controls are located on the front instrument panel. Rear seats of the helicopter fold down, which makes it possible to take on board a cargo of up to 680 kg. Considering the size of this helicopter, such a load capacity is quite impressive. Forward seats can be moved, they are located on so-called rails, which makes it possible to take on board various bulk equipment, carrying specialists of various industries in protective and special suits, with portable equipment, etc. The helicopter also has a luggage compartment with a separate door. 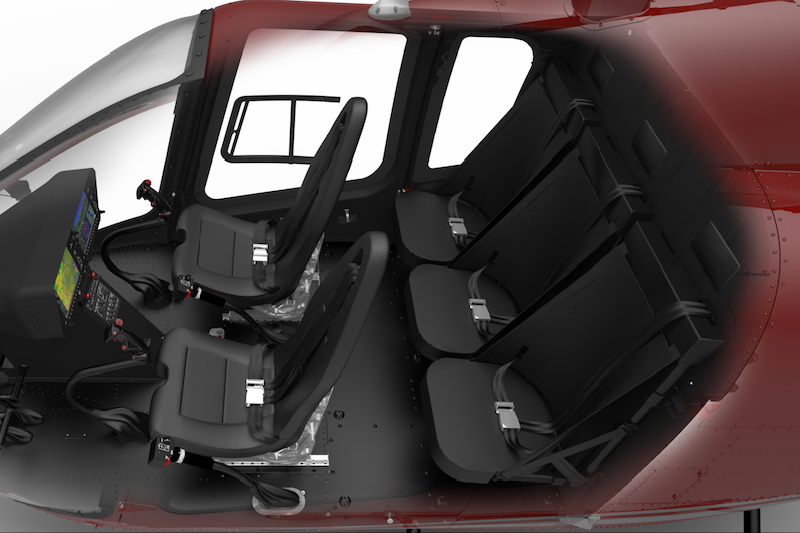 Bell 505 helicopter is designed to carry 1 pilot and 4 passengers. Average in size, but having a larger cabin and passenger capacity like the Robinson 66, will allow the 505 model to become in demand on the helicopter passenger charter market in a number of countries.

Bell Jet Ranger X is optimized to fly in different conditions, it is equipped with enough modern navigation equipment and has a number of technical novelties which we would like to discuss in this article.

The specialists of Bell Helicopters have applied a number of components and units from the model Bell 206, using this helicopter, as a base for the development of 505. But they were able to design a lighter cabin and lightweight tail boom. These changes allowed to reduce the takeoff weight of the helicopter and reduce the load on the main rotor blades. The helicopter has excellent characteristics of autorotation due to highly inertial bearing rotor. Noise level is 3 levels, which is lower than ICAO limitation value.

The helicopter is equipped with the Garmin G1000H glass control panel, which optimally informs the pilot about the flight situation and the state of the helicopter and engine parameters. Information is displayed on the multifunctional display. System includes GPS complex with transponder, TIS route display, HTAWS system of warning of approach and collision with relief, mobile map of flight route display and Garmin HSVT artificial vision, electronic air horizon, altimeter and flight speed indicator.

Up-to-date data allows the pilot to monitor engine parameters in the automated mode, receive current information on power, consumption and temperature of fuel and lubricants.

The helicopter is equipped with Turbomeca Arrius 2R engine of 504 hp capacity. The Arrius power plant is notable for its ability to improve fuel economy. The engine is reliable and time tested and is fully integrated with Garmin helicopter control system.

Thanks to its characteristics and features Bell 505 Jet Ranger X helicopter is gaining popularity throughout the world. The helicopter is multifunctional, suitable for various tasks, has a wide range of applications, including private and commercial flights. The helicopter is very conceptual, functional, economical and easy to operate. Such helicopter will be gladly accepted in the fleet of any airline.