Helicopter control systems are quite diverse, but nowadays we can distinguish perhaps three most popular and used ones – the tail rotor, Fenestron and Notar. All of them are intended to compensate the reaction torque from the helicopter main rotor, are designed to prevent the helicopter from spinning around its axis, and are the most important nodes in helicopter control. They have their own distinctive features of construction, pluses and minuses. Let us consider each of them in more detail. 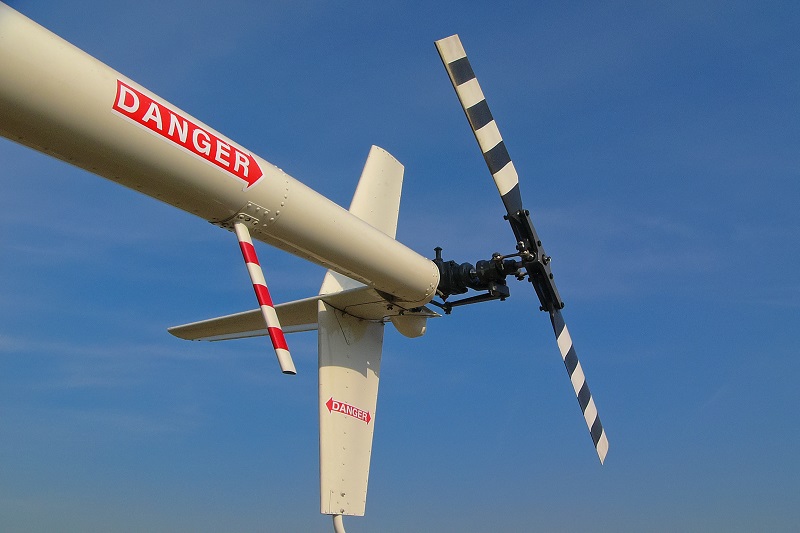 The tail rotor is designed to control the helicopter on course, its purpose is to counteract the reaction torque from the main rotor and prevent the helicopter from spinning out, the so-called in aviation yaw – angular motion of the aircraft relative to the vertical axis.

The tail rotor is driven by the interaction of PTO shafts through the main rotor gearbox, creating thrust perpendicular to the vertical axis of the helicopter. Pitch, i.e. the angle of the propeller blades is carried out with the help of control pedals in the helicopter cockpit. In practice, the most commonly used propellers with two blades, such as installed, for example, Robinson 44, but depending on the technical features and weight of the helicopter, there are control propellers with three, four and five blades.

The tail rotor partially removes engine power, up to 10 percent on average. The single-screw helicopter control scheme is quite simple in operation, does not require significant costs in terms of maintenance and repair, in comparison with other schemes. But in its turn, the control propeller generates more noise compared to the fenestron or Notar.

Fenestron has a positive effect on the aerodynamic characteristics, reduces the resistance of the helicopter in the air, is safer for the people serving the helicopter, due to the closed type of housing. Another important quality of Fenestrons is minimal vibration due to the higher rotation speed of the blades, thus increasing the comfort level while piloting the helicopter. The combination of a Fenestron and a main rotor with 4-5 blades reduces helicopter vibrations to a minimum, which makes such types of aircraft more acceptable for air ambulance aviation.

In some cases, more power is required to hover the helicopter, compared to the usual control propeller. But as a rule, Fenestron machines have more engine power initially compared to lighter helicopters. While having a higher noise level at high frequencies, the Fenestron is still quieter than a conventional steering propeller for our perception.

Notar – no tail rotor, means “no tail rotor”. The system purpose is to counteract the reaction torque, like in the case of the tail rotor or Fenestron.

In a helicopter equipped with Notar system you will not find the usual propeller. The design feature is the rotary nozzles on the tail boom. Inside the fuselage there is a fan. The airflow, partly from the main propeller, enters through air intakes with the help of a compressor, then the fan disperses the airflow through the tail boom to the controllable nozzles. Thus, the pilot can control the helicopter, i.e. perform maneuvers to the left and to the right relative to the helicopter axis.

Helicopters with Notar are considered to be one of the safest, moreover one of the most “silent” in the world. This unit is put as standard on the helicopters of the American company MD Helicopters.