Robinson Helicopter has begun assembling its 1,000th R66 helicopter. This model is very demanded and popular in the world along with R44. This is promising news for the company and the development of the rather popular helicopter model.

R66 single-engine helicopter with two-blade main and tail rotor. Robinson R66 is made of aluminum and steel alloys as well as composite materials.

The main feature of the helicopter is gas turbine Rolls-Royce RR300. It is more compact and lightweight in contrast to the Lycoming O-540 six-cylinder piston engine, which makes the R66 lighter than the R44. Also worth noting is the cylinder type fuel system. The new engine for the helicopter is equipped with a de-icing system, which is included in the basic package, is quite an important point in terms of operation in our country in the winter. 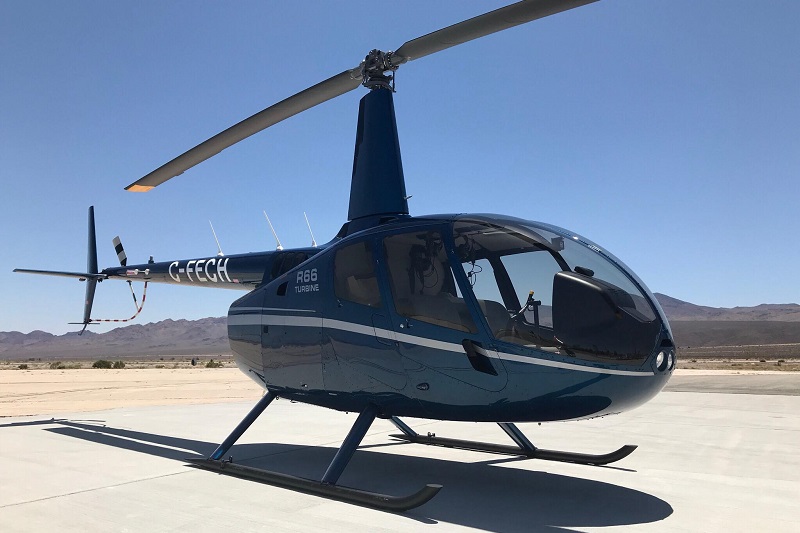 The turbine consumes 87 liters of kerosene per hour, the engine of the previous model consumed 57 liters of gasoline per hour.

The configuration of the helicopter cabin provides a panoramic view for both the pilot and passengers. The R66 has energy-absorbing seats, which has a significant impact on comfort.

R66 is made of composite materials, aluminum and various steel alloys. The helicopter is equipped with electromechanical instruments, as well as modern digital ones, which considerably expand range of possibilities for a pilot.

Robinson helicopters are assembled at own plant in Torrance, California, USA. Own production guarantees highest quality control. Equipment at the plant meets all the latest standards and requirements. Coordinate measuring machines are used for checking accuracy and are capable of checking the dimensions of machined parts to within 3 microns. Such precision has a significant effect when replacing spare parts.

Flight and technical characteristics of Robinson R66 helicopter allow putting it in line with helicopters of several times higher cost. The cost of the Robinson R66 Turbine with a base configuration is 815 thousand usd, one of the lowest prices for a gas-turbine helicopter.

In our country the R66 is used for private and commercial purposes. In our work we are using the helicopter for sightseeing flights as well as for tours and chartered flights within Ukraine. Have a pleasant flight and welcome aboard!